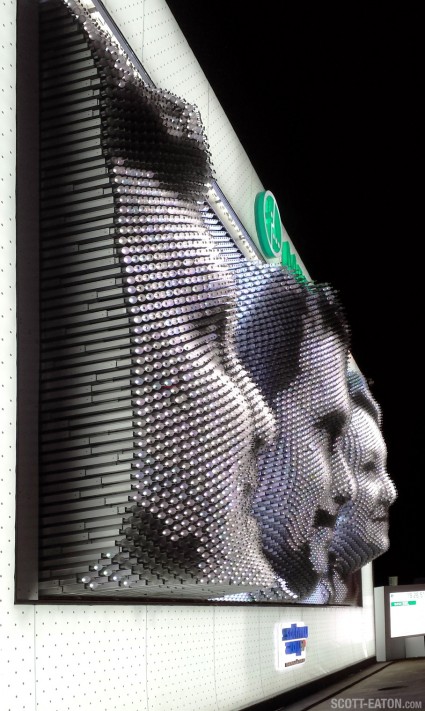 I am just back from the Sochi Olympics where I was working with the amazing teams from Asif Kahn and iArt on the “Megafaces Facade” for the Megafon pavilion. Over the past six months I have been providing creative direction for this crazy project:

I was asked to come on-board to provide expertise in computer graphics, lighting, faces, and overall aesthetics to the piece. The challenge from a visual design perspective was to take raw, 3d scan data from the ‘photobooths’ in the pavilion and then develop an automated solution, which we called the Creative Processing Pipeline (CPP), for coloring, relighting, composing and outputting the faces to the facade in way that, well, looks cool. It is a bit like composing a drawing or photograph, but algorithmically so that it always (ermm, almost always) produces a compelling visual result. 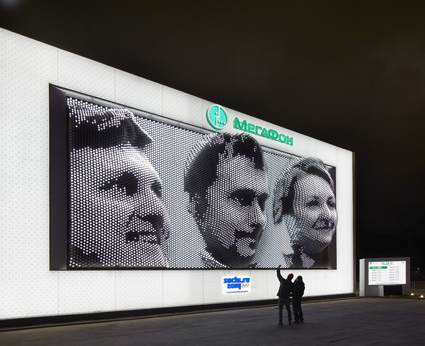 Checking the output before the opening ceremony

The business side of the facade.

The facade itself is composed of 11,000 actuated pistons. Each piston is capable of 2m of projection at full extension and has an RGB LED globe at its tip. The hardware provided our design constraints and the inputs to the system were a pair of 128×330 pixel images – one for LED control and one for piston depth. Each facade triptych was composed automatically by the CPP from a trio of 30k polygon face meshes streaming to us from the scan booths.

Beyond our small but clever CPP module, the iArt team did a staggering job of engineering the entire system – from the scan booths, to the facade hardware design, to the scheduler and SMS notification system, to the control and final actuation of the pistons. The sound when the facade is moving is amazing – like waves crashing onto a pebble beach, and to see your face at 4 meters tall is an amazing experience. 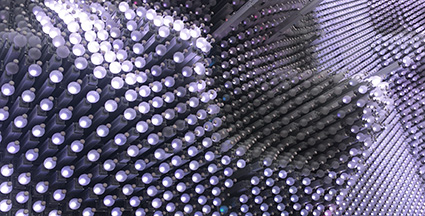 undulating closeup of the ‘hardware’

Find more press coverage at WIRED, Wallpaper and Creative Review. Finally, a special thanks to collaborator Martin Aufinger who provided the Houdini wizardry that controlled the CPP.

No Responses to “Megafaces at the Sochi Olympics”