I’ve recently returned from a fun couple of days running an Essential Anatomy masterclass for the talented artists at SUPERCELL in beautiful Helsinki, Finland. Readers might know SUPERCELL as the genius developers behind hit mobile games Clash of the Clans, Boom Beach, Clash Royale, and Brawl Stars. They have a reputation for expressive, cartoony character designs, so why the big interest in anatomy? Well, every figurative artists, even cartoonists, needs to drill down into the fundamentals of anatomy in order to build a foundation solid enough that they can stylise and abstract the human figure in a compelling, ‘believable’ way.

Over the two days we covered the essential construction of the body and head in enough detail to let artists working on stylized characters make informed decisions about the shapes and forms they put into their creations, without guessing. Anatomy doesn’t have to be realistic, and is most interesting when it isn’t, BUT the body should fit together in a coherent way that respects how it will move and deform when animated. 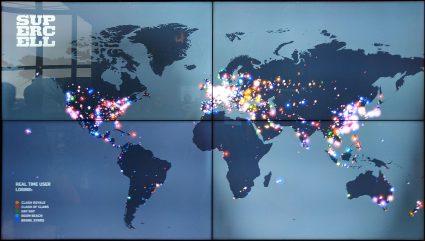 On a side note, visiting SUPERCELL, one of the most successful mobile game studios in the world, gave me a new perspective on the massive scale and distribution these studios’ games are deployed at. At the entrance is a live map showing the real-time view of players around the world logged in to their servers – millions and millions of concurrent users (estimated at about 4 million by our guide). Interestingly, this was a morning studio tour so you can see the gaming habits of people across time zones – in the far east where the local time would be afternoon/evening, in Europe where it was day, and then in North America where it was the middle of the night! But perhaps more interesting is what the dark parts of the map say about the socioeconomic distribution of mobile platforms and gaming across regions and cultures – access to this technology and the disposable income and leisure time to take advantage of it is certainly not evenly distributed across the globe.